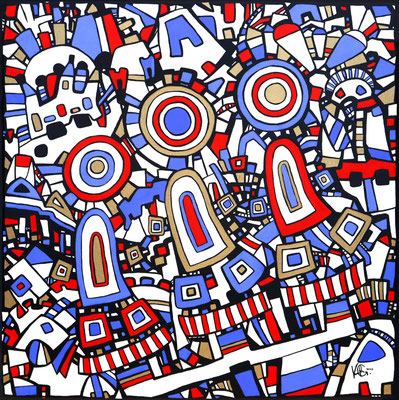 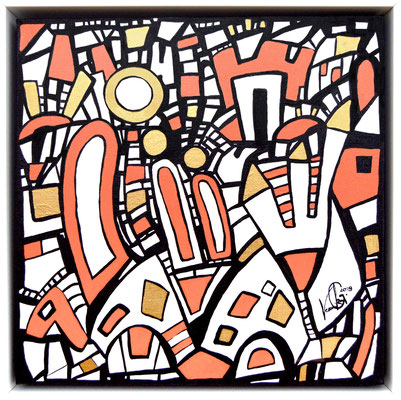 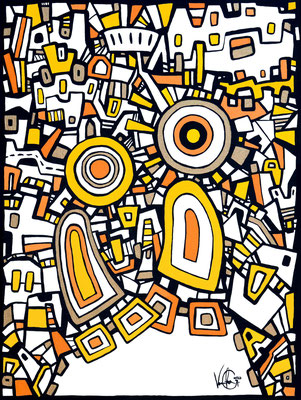 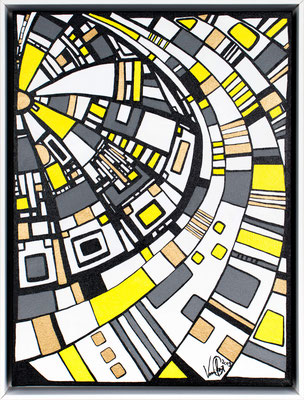 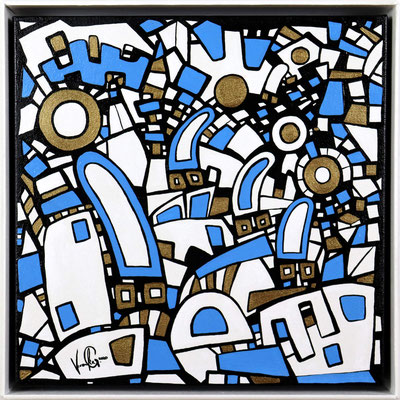 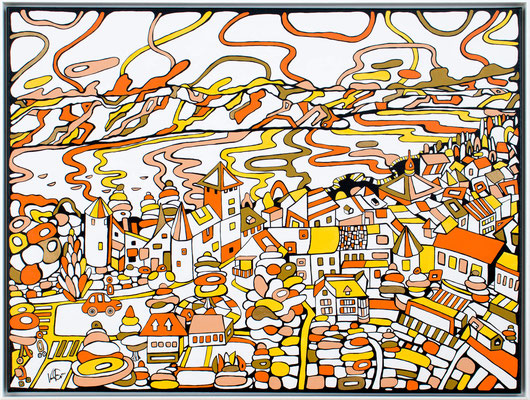 About the series "Following the black lines":

The typical artistic expression of the artist Veronika Spleiss began with the series "Following the black lines": hidden objects in geometrical shapes. To this day, works in this series are created and constantly change. At first glance, it is about fragments of black lines that come together to formulate a story. But above all, it is about interpersonal relationships that are depicted in a static state. Abstract figures stand alone or together in a painting, leaning towards each other, turning away from each other, or even standing neutrally next to each other. In all cases, a fragmentary environment surrounds them, allowing them to come together or separating them. The works are abstract snapshots of an interpersonal development. A moment is captured statically, hidden and visible - the basic essence of each painting.

About the series "Life Series:

Entirely in the sense of Friedrich Nietzsche, the aspect of a perspective is shown as the "basic condition of all life" (JGB, KSA 5, p. 12). Because life encompasses a whole. But man himself has no access to this. The living person is always bound to his own perspective and view of the world, which has a certain inherent order. The works play with these aspects. Even more, the artist tries to visualize life graphically in her versatile perspectives. For the viewer of Veronika Spleiss' works, this means first and foremost chaos - a supposedly chaotic assemblage of different perspectives that emerge from the black or nothingness. Each particle, each geometric form stands on its own, but approaches the other forms and thus establishes a necessary connection. 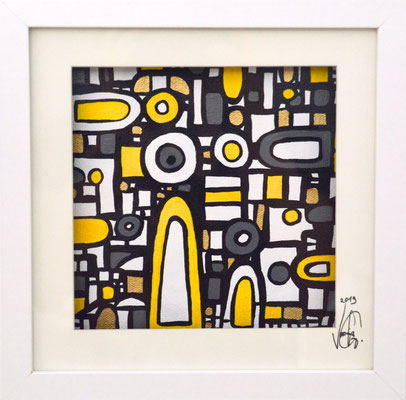 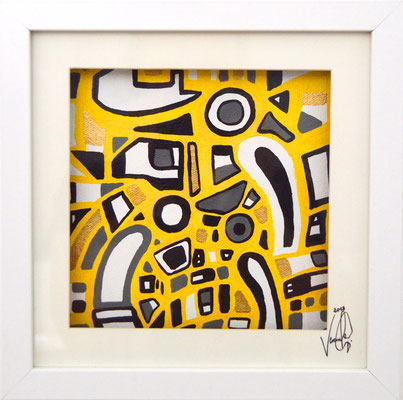 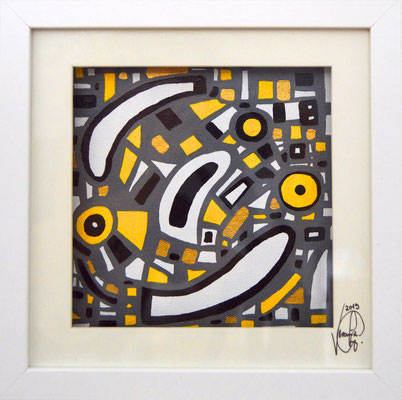 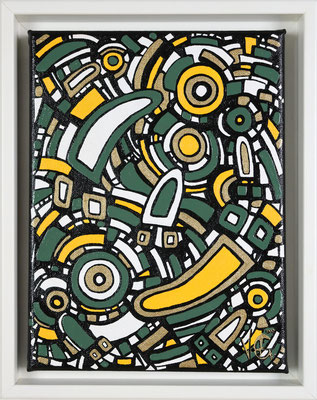 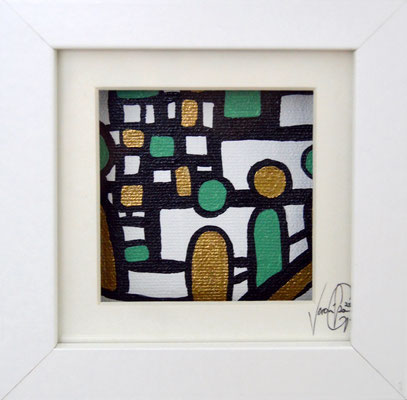 About the series "Perspectives":

The series "Perspectives" by Veronika Spleiss was created from small square-shaped works, which continues to evolve today. The paintings from this series seem even more abstract than from the others, although they use the same stylistic means. The fragmentary compositions are no longer thematically recognizable. No rudiments of realistic objects can be discerned, as is the case in the Life series, for example. In a color palette that is reduced as always, figures as well as surroundings come together fragmentarily and take on abstract interpersonal themes in motion. 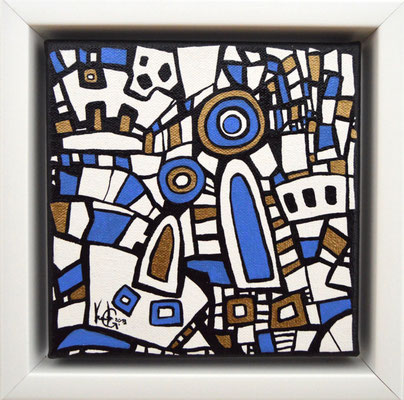 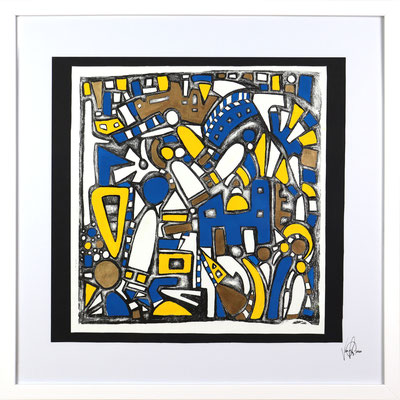 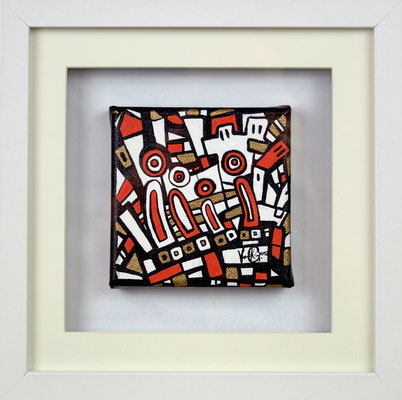 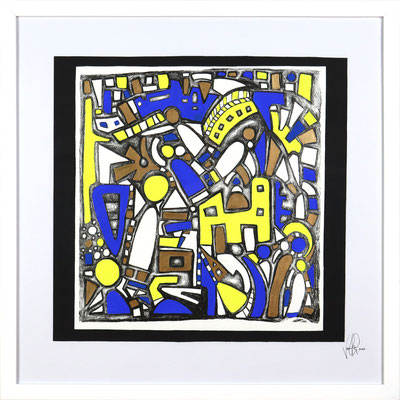 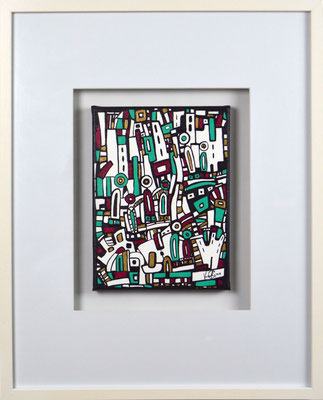 About the series "Ways":

The artistic series "Wege" contains some parallels to the other series of the artist Veronika Spleiss. Both stylistically and thematically, the theme of paths traverses the work of the artist. The series began from the life series with the work "Wegleben". " Paths" deals consciously - thematically as well as representationally with paths, twists, movements - always in the context of "way". People set out on paths, stand beside them or elude the path of life they desire. Paths on which man walks and always stands in relation to others. Often the paths are clearly recognizable. They are straight, curved, branch into each other or in turn merge into a common path.